I’d been having problems with BT Infinity for a few months. Every so often web pages would just hang, or streaming video would freeze. Oddly it would often coincide with a new certain devices connecting to the network. Frustratingly, my connecting to Wi-Fi with my work laptop (Dell Latitude, Windows 10) would cause the Internet to stop working for a good half an hour.

I phoned BT and found their helpline very unhelpful. When asked to unplug the router overnight, I asked why this was needed and was told ‘it’s technical’. Throughout the process I felt as though I was just being read a script and not being listened to.

Anyway, I had managed to get my work laptop connected and had hooked into my company’s VPN when all the devices in the house stopped working again. My phone, the Apple TV, Kindles – all except for my work laptop. How odd. When I disconnected from the VPN, it too started to not work.

This made me think to try using Google’ DNS instead of BT’s. To my surprise, the Internet started behaving like a 70Mb/sec Internet connection should for the first time in months. My next step was to log into the painfully slow BT HomeHub router to try and change its DNS settings at the network level, rather than for each and every device. It turns out BT have restricted that, because normal people can’t be trusted to change their DNS servers, it seems.

After doing some digging, I discovered that the Apple Airport Express base station I’d been using to extend the range of the wireless network could be used as a NAT bridge and in place of the BT Homehub. I found this helpful post on the BT Forums which I will recap here incase BT decide to shut down or move their forums.

In short, you plug in the Ethernet cable from the white BT Openreach box into the WAN port on the Airport. Your username can be anything @btbroadband.com (I’m sure BT don’t rely on this for actual authentication, that’s tied to your line) and your password is simply a space.

You can then use Google’s DNS servers in place of BTs. One extra thing I had to do was set IPv6 to be ‘local link only’ under ‘Internet Options’. 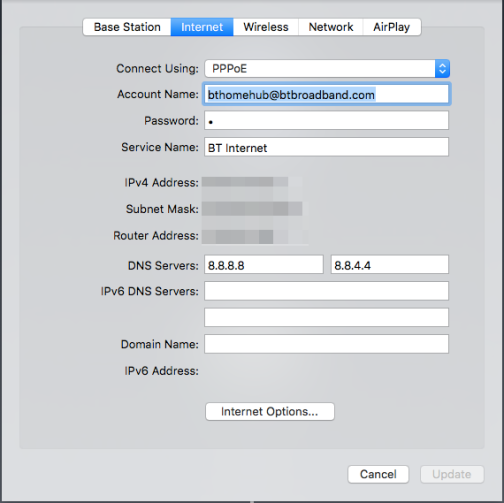 This setup allowed me to retire my BT HomeHub for good, and the Internet connection has been flawless ever since. My Kindle can even connect, which is saying something.

Oddly, the default IP range for the Airport’s DHCP server is Class A, which means your devices won’t have the usual ‘192.168.1.X’ scheme, but this can be changed if needed. You can change this under the Network > Network options tab, though there really is no need other than it being a more common practice.

Ever turned in your iPhone to see a calendar notices suddenly disappear from the lock screen? I've been seeing this a lot lately, and it's really bugged me – especially when my phone is on silent (as it is most of the day), so I can check it at chosen intervals rather than be disturbed (developer thing, no doubt) .

Well it turns out iOS will remove a notification after the event has finished. Kind of makes sense, although it does mean if you totally miss an appointment, you'd be none the wiser unless you pay very careful attention and see it before the notification quickly disappears.

Odd quirk, but probably not a bug – just a design choice (I would say it makes sense to remove them from the notification centre, perhaps not the lock screen) and Apple should probably hide it before the screen turns in to avoid the confusion of seeing something for a split second.

If you search around for WiFi connection problems relating to the Kindle, you’ll soon discover that Amazon seem to have played a bit fast and loose with the WiFi specification and problems with the Kindle are rife.

It was no surprise to me then that when I switched to BT ADSL that both my Kindle 3 and my Dad’s Kindle 4 wouldn’t connect to the Home Hub 3 router. I counted 11 other devices in the house which connected without any trouble; laptops, iPods, Xboxes and phones of different makes – so I knew the problem was with the Kindle. After not getting much help from Amazon (for what its worth, their support staff answer the phone quickly, and were pleasant to deal with) I decided I would just need to go through a trial and error process myself. This was time consuming, because the problem only seemed to manifest itself once the Kindle had put the WiFi radio to sleep, so after making a change to the router’s configuration and reconnecting the Kindle, it would always work, and only after 30 minutes or so when the Kindle failed to connect would I know if there was still a problem.

Anyway, the solution for me was to disable mixed WPA and WPA2 encryption, and set the router to use only WPA2. Contrary to other Internet sites, changing the wireless channel or turning off ‘N’ mode made no difference to me. This fixed worked on my Kindle 3 3G and the new Kindle 4 WiFi. All my other devices still connect fine (event a first generation iPod Touch) so not having the original WPA specification in use doesn’t seem to have any drawbacks.

I hope this is of use to someone – let me know in the comments if you’ve had the same problem.